The ‘We Are Undefeatable’ campaign has launched across TV, social media, and YouTube with the aim to inspire people living with long-term illnesses to become more active and increase their physical activity. Chris, one of our Warwickshire coaches, explains how he got involved with the campaign and what it means to him.

“My name is Chris Bright and I’ve been a Xyla Health & Wellbeing Coach since April 2019, working on the NHS Diabetes Prevention Programme (NDPP) in the West Midlands. Much of my work has been supporting the at-risk populations in Warwickshire and it’s been a really interesting challenge which I’ve thoroughly enjoyed.

My motivation for joining Xyla Health & Wellbeing and becoming a coach stems from something that I live with that’s closely linked to the NHS Diabetes Prevention Programme and the support I offer to its service users.

I live with Type 1 diabetes the brother to Type 2. Unlike Type 2, it’s unaffected by diet or lifestyle and caused by my immune system destroying my insulin-producing cells in my pancreas. It means I have to inject insulin every time I consume carbohydrates and constantly monitor my blood glucose levels to ensure I don’t fall into hypoglycaemia or hyperglycaemia. I like to think of it as the 24/7 job I’ve been given which I didn’t apply for. It comes with its challenges but for the most part, I’ve been quite successful in ensuring it doesn’t stop me from achieving my goals and dreams. 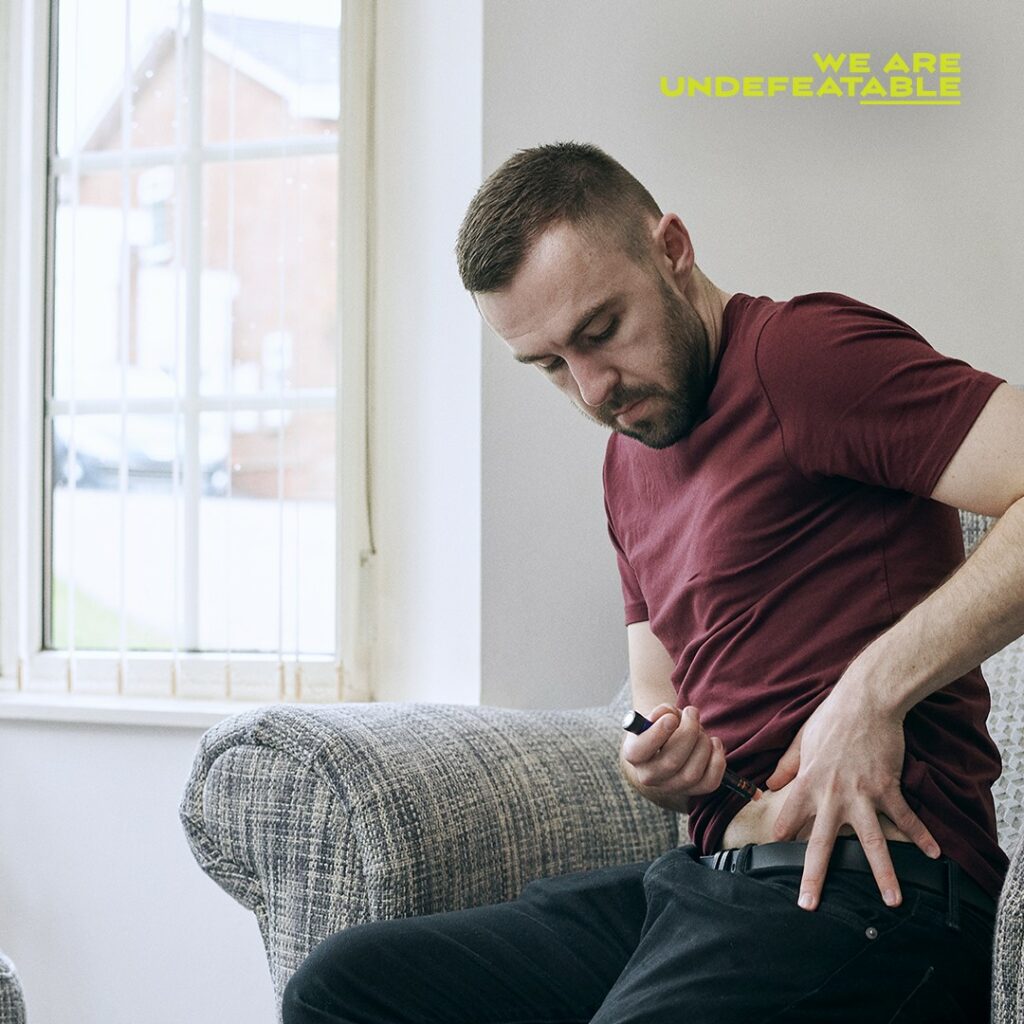 I’ve pushed myself over the years to reach a high standard in football (Wales Futsal International) whilst also helping others with Type 1 diabetes receive support, guidance and inspiration through my work with The Diabetes Football Community. I then saw an advert on social media looking for a cast of people with chronic health conditions involved in sport and physical activity, and I thought why not?!

I put my name in the hat with a paragraph and a couple of pictures of myself playing sport and sent them off to the casting agency thinking very little of it. A week later and after a video interview and an array of emails, I had the producer and director of what we now know as ‘We Are Undefeatable’ turning up to my house for a chat.

Never in my wildest dreams did I think I’d be picked to be involved in a national campaign to increase activity amongst people living with chronic health conditions, but it turned out the agencies, organisations and charities involved felt my story was a compelling one which would raise awareness and inspire.

I really do hope that as this campaign grows it does just that and more, as it follows on from the highly successful previous Sport England campaign “This Girl Can” to encourage physical activity and sport for women.

After living with Type 1 diabetes for 20 years, being involved with this campaign is an absolute honour as it sheds light on so many chronic health conditions on TV, radio, the press and social media. I’m still in shock seeing myself injecting insulin on TV but it fills me with immense pride that we’re finally trying to change an area I’ve always felt has been lacking.

Throughout my many years of playing sports, I’ve never felt that people in the mainstream environment have ever understood my condition. Coaches, referees, club officials and players have never really got it and I think that this campaign is the starting point to changing that, and that’s why I wanted to be involved.

I think it will alter public perceptions of chronic health conditions as well as inspiring and supporting people living with these conditions to get more active. If we can do it with the challenges we face, I hope it can push others to believe they can do it too.

I really believe this is the beginning of the focus to drive equality into sport and physical activity for people living with chronic health conditions and it’s beyond an honour to be at the start of that journey.”

You can watch Chris’s story by clicking here.

To find out more about the ‘We Are Undefeatable’ campaign, visit their website at https://weareundefeatable.co.uk/

How can my values help me with my goals?

We have talked about SMART goals a lot on our programmes, but how can we make sure our goals fit…
Read more

Do I need to give up my favourite foods, drinks & activities?